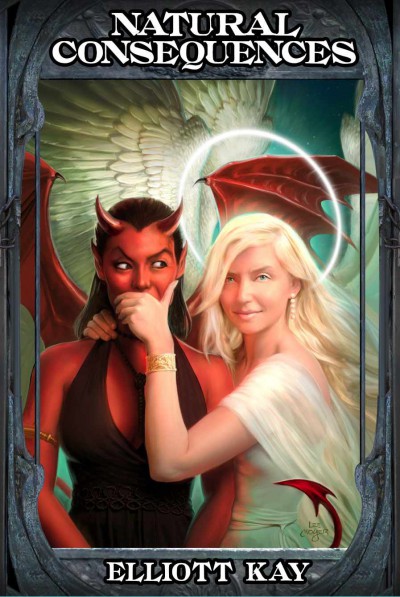 The exciting sequel to Good Intentions!

Alex Carlisle has enough to deal with even on quiet days. Living with an angel and a succubus is no easy feat. One has divine responsibilities she can’t explain, and the other tempts him toward a decadent lifestyle he’s not sure he can manage. Add to that the stresses of college and trying to hold down a job, and it’s lucky Alex can even keep his head on straight.

Yet the complications keep on coming. An amorous (and terrifying) werewolf won’t take no for an answer. Vampires from across the country want to know what happened to their allies in Seattle. To top it all off, events in the city have drawn the attention of Federal agents who know far too much about the supernatural, and they have no patience for the chaos that Alex and his friends leave in their wake.

The humor is strong, the pop culture references are frequent enough to be amusing, but not so overwhelming as to be old. The plot moves quickly and well, with character development, plot progression and action (Both sexy and violent kinds) used well. I’ve just finished the sequel and all I can think is, “Yeah, but when is the third one coming out? Because I need it. Now.”
-James Kerce Binion

Fun story, great dialogue, steamy situations, some great stuff to contemplate (the nature of the universe).. just good stuff all around. What I am starting to expect from Elliott. Keep up the good work!
-Tarl